I couldn’t tell you how many times I’ve heard people complain about the attitude of the reception staff at their local doctors surgery.  Not just at one particular surgery but at several, all over the country.  As a hypochondriac (brain tumours, pulmonary embolisms and good old breast cancer, I’ve had ’em all…almost) I’ve tested out the receptionists in towns and cities from London to Nottingham, Woking to Castle Donington, and can honestly say that the vast majority have been pretty horrible.

Yesterday I called my local surgery, the Market Harborough Medical Centre – let’s name and shame, to book an appointment.  I was going away for four days had four days of my regular medication; anti-anxiety drug Pregabalin and mood stabiliser Lithium, left.  The maths is pretty straight forward, I needed a repeat prescription sooner rather than later. I also wished to speak to a doctor because, let’s face it, a regular supply of Diazepam never hurt anybody (er…) and I’m getting a couple of unpleasant side effects.  A ten minute appointment with a GP is a fair request, right?  Five’d do, I’m an experienced GP hassler. 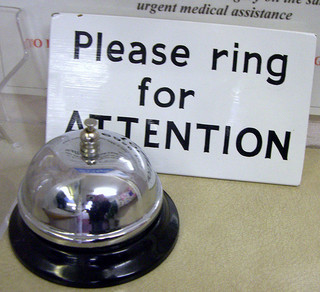 But if I thought I’d just be given an appointment because, as a British tax payer and registered patient of MHMC, I’m entitled to one, I was obviously living in cloud cuckoo land, surrounded by a herd of pink unicorns frolicking beneath rainbows.

The wonderful, sweet and caring receptionist I was unfortunate enough to be put through to had other ideas about how I should be managing my illness and medications.  With her phone set to ‘Voice of God’ volume so I needed to hold it away from my ear – I wouldn’t want to put her out by needing a second appointment for Tinnitus – she informed me with a irritated sigh that my usual GP wasn’t available until next week ‘and ANYWAY we’re not booking for Dr Yates until Friday’.

I explained my plight to no avail. ‘So you want a repeat prescription?’ yes please, oh merciful one, ‘well, you have to have a blood test.  You were SUPPOSED TO have had one in February.’

That was when I started losing my rag.  I shouldn’t have, I know, but seriously? I don’t think I told you it was a repeat prescription for Lithium (which does indeed require a regular blood test).  And besides, if you nosey in to my medical records further you’ll find I had the tests in March and my prescription states that it’s review with the doc time.  Also isn’t this filed under None Of Your Business?

She went on to advise me, in loud, exasperated voice, ‘you know you don’t have to have an appointment, you can still get your repeat prescription even if it says you’re due for review’.  I’m sorry but what?  You’re advising me to ignore the advice of the doctors and at the same time you’re trying to talk me out of booking the appointment that I called for?  I get that you’re busy but…but…*head explodes*

Eventually I was begrudgingly granted my appointment, not before being asked in the most condescending way possible; ‘don’t you think it would be better to wait until Dr Yates is back so you can see him?’ (I didn’t think of that, what a complete IMBECILE I am.  I’ll do this the right way and hold fire on the medication that stops me from LOSING MY MIND until he’s free), just so I was aware that I, pathetic minion, was being given something against the better advice of the highly qualified health professional manning the phones.

I hung up, I sat down in my kitchen and I cried.  I felt like I’d been bullied and belittled, like I’d lost control and worst of all, I felt uncomfortable at the idea of my medical records being open to this woman, in a small town where gossip is traded like sweets, especially by certain types of women.  The conversation went round and round in my head all afternoon and I was shaky, tearful and snappish for several hours. I was nervous about my visit to the GP – something I’ve learned to brave out and normally find fairly easy to do – and asked Mr H to go with me for moral support.

Actually, I should say here that since writing this I’ve seen the locum GP who happened to be pleasant, professional, interested in my condition and very helpful indeed.

My reaction to a situation like this is an extreme one, but that doesn’t excuse the receptionist’s behaviour, or the similar behaviour of others in her position. I wouldn’t expect anybody to guess that I have Social Anxiety and, specifically a phobia of the phone (I struggle to call my mum and it’s pretty much unknown for me to phone my best friend). However I think it’s fair to expect a level of patience, empathy and, well, just a smidge of professionalism from someone paid to speak to people who potentially have a life threatening illness, are scared for their health or have a mental disorder. Should not every call be answered under the assumption that the patient at the other end falls in to the category of ‘To Be Treated With Kid Gloves’?

The job of a receptionist at a doctors surgery is doubtless a stressful one and I imagine the women at MHMC encounter all sorts of not in the least wonderful people.  Nobody expects them to be infallible, but they are paid tax money to take it all on the chin and smilingly greet the next person. It’s just part of the job and if you can’t manage it try something else. You know how it always seems to me? It seems like these gatekeepers have been given the tiniest bit of power and it’s gone straight to their heads.  Pull your necks in girls, nobody’s impressed

So if the idea of being polite to everybody is just too much could the surgery’s computer system not flash up a warning for those who most need the special treatment? Not that long ago the unhelpful attitude of MHMC staff led to me not pushing for drugs I needed and in the past Mr H has dealt with my requests and requirements because, shot down in flames on a phone call, I timidly retreat. I can’t be the only one. At least the receptionists receiving a warning that a particularly vulnerable or awkward patient is on the phone would allow them to save their niceness quota for those who need it the most.

Have you experienced the Gatekeeper treatment at your GP’s surgery?  Or perhaps somewhere else? How do you think NHS services could be made more accessible to patients?