Much as I despise the idea of giving the old shrunken womb more airtime than she deserves I thought I would very briefly clarify my position following yesterday’s Liz Jones-related post, which I perhaps articulated a smidge badly in a fifteen minute keyboard bash (though I should say I in no way go back on anything I said, all of it remains my view though some of the smart commenters beneath have given me food for thought too).

When I wrote that post I should’ve begun by clarifying that I in no way agree with anything LJ said beyond using her article as a jumping off point for my own concerns because I do think, though she put it with as much finesse and subtlety as a bull going crazy in Lladro, that writing – good writing – is an art and that the flooding of the market with over-ambitious bloggers high on networking skills and low on talent has begun to overshadow those, both bloggers and employed/qualified journos, who care about words and produce quality, worthwhile content be that hard hitting political analysis or musings on muffins. 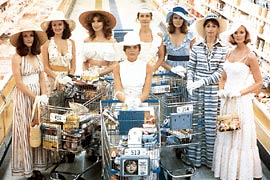 Ms Joneses article was, to put it mildly, deeply offensive on so many levels.  First she’s woefully wide of the mark when it comes to her view that all Mummy Bloggers are apron-wearing Stepford Housewives.  The point she entirely fails to grasp is that feminism should be far less about crashing through a glass ceiling in a power suit than it is about doing, as a woman, exactly as you choose.  If you wish to stay at home popping out babies, baking and putting dinner on the table at six every night feminism says you can, if you choose to go back to work three days after giving birth feminism says go for it, if you prefer to remain childless and work your way up the corporate ladder feminism is with you all the way.

I have my own reservations where this is concerned, I don’t think the pressure women put on themselves and on other women under the banner of feminism and ‘having it all’ is a good thing, especially not where mental health is concerned.  Having it all, as I’ve often said on other forums, should never mean ‘doing it all’.  But that’s a small price to pay perhaps for the freedom we now have over our bodies, minds and lifestyles.

As far as the casual portrayal of the burka as a shackle foisted on women by controlling men in a controlling male-centric society, could LJ be any more insulting to those women who choose to wear the burka?  While yes it can be, in many instances, a patriarchal tool used to keep women in their place, but I have also come across a number of women, both in Britain and overseas who choose themselves to wear the burka.  Perhaps those women are freer and braver than those in tiny skirts, boob jobs and eyelash extensions, choosing to be judged on their personality rather than their looks while respecting their own culture and traditions.  I don’t know enough about the subject to argue for or against the burkha but neither do I imagine that Liz Jones (who appears today in the Mail modeling mini dresses from the Kardashian’s collection for Dorothy Perkins) is well-informed enough to cast aspersions on these women or those who choose to follow a life path in any way different to hers.